Ohhh Wilsons Promontory…. how do I start this? Well, as we mentioned we knew going to New Zealand as a first country will set a high standard for all the others to come in terms of nature and its beauty. So for Australia we tried to choose the things that are unique to the country. Of course most people think of the deserted outback and the Great Barrier Reef first. So did we and we actually hadn’t heard of Wilsons Promontory until my friend Sara recommended it as one of the most beautiful places she has been to, if not the most beautiful one. So as we wanted to discover her country we decided to include it into our route. 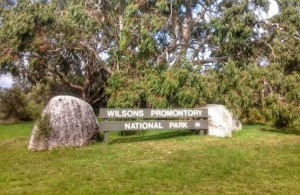 Reading up on it, we learned that it is the southernmost part of mainland Australia and once formed a land bridge that allowed people to walk to Tasmania. The hiking and camping opportunities were described as exceptional even though there is only one camping site in the whole National Park. It is so popular that during holidays you have to enter a ballot to get a place. So this all sounded fantastic. When we told people in Sydney and even Melbourne about our plans, we were surprised to hear that some didn’t really know much about the place, had never been or said it is the closest Australia comes to New Zealand. Others looked at us asking why we would go there in winter as it can get cold and windy. So we went their with mixed feelings in the end not knowing what to really expext.

We got to ‚the Proms‘, as it is also called, early in the morning on a sunny day.  The Australian ‚winter‘ showed itself quite quickly though as the sky was full of clouds an hour later. After a while it would clear up and let a beautiful sunshine through. Another hour later it would change again to drizzle rain for half an hour and change again to sunshine for a bit. This would go on the whole day and is caused by the strong winds coming from the coast. We later realized that it is a key characteristic of the Prom as it is caused by thr strong winds coming from the coast. It is however also the reason what gives this place its wild beauty. 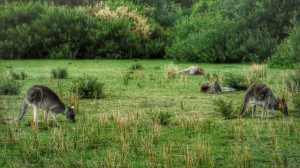 So we entered the park and were warned that there is wildlife crossing the roads. And yes 15 minutes into the park we saw our first kangaroos :). A whole bunch of them were chilling, grasing and scratching themselves in peace and did not move when I went closer to get pictures. Yes! This is how we wanted to discover the wildlife in Australia, out in the open and not going to the thousand of tourist places where they charge you a lot of money to see some koalas. And wildlife we did see here! That is one of the remarkable things about the Prom especially compared to our experience in New Zealand. Wild animals were just everywhere and you are right in the middle of it. From kookaburras to rosellas lurk to kangaroos, wombats and emus. It was incredible to see them all free in the wild.

We started our walk from the Tidal River campground on the west side of the park. The river flows through the whole park and ends in the sea by Norman beach. Walking over the bridge the river looked so peaceful and beautiful with its dark blue colour against the brown red stones and green shore. We went on and walked through heathland and eucalyptus forests with massive old trees that survived several fires and were now a comfy home to wild animals. As we walked towards the coast the forest got a magical feel. The trees where old and bended by the sun to form beautiful alleyways. Birds were singing all around us and we were the only ones on the path. It was so magical. When we got to a crossing where you could take a turn to go to Squeaky Beach, I really felt like Alice in Wonderland, hopping through the forest full of happiness not knowing what the next turn will reveal.

We took a left turn first which brought us to a scenic lookout with a fantastic view of Norman and Squeaky Beach and the offshore islands. The highlight however came when we got to Squeaky Beach. It is a beautiful white sandy beach that actually does make a squeaky sound when you walk over it. On the shoreline you have massive boulders which look like they dropped down here from the sky. Surrounded by green land on the one side and the wide open blue coast on the other. With the evening sun shining down on the beach this place just looked out of this world. I was walking up and down the beach, amazed by the ever changing colour of this scenery and the melodie the waves created as they hit the coastline. And once again, it was just us and Squeaky Beach! This was a very special evening for us. Squeaky Beach found its way to my heart forever and is definately one of the most stunning places we have been to.

So thank you Sara for this recommendation! A cheers to you with De Bortoli Bubbles was the perfect ending to this day. We would recommend anyone visiting Australia to make this a must see on their list and spend 2-3 days there and go out of season like us if you want to have this place to yourself.