Once in Uyuni we almost missed our bus to La Paz as our tour operator had forgotten to put us on the reservation list. Luckily we got the last seats and I could get some Llama skewers on the local market as a first dinner. 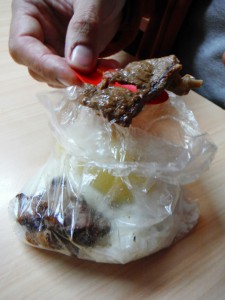 The second dinner was served on the bus straight after boarding in parking position. Why? The stuart explained to us that in the next 3 hours we would not be able to eat properly because of the rough road conditions. I should have realized that in the moment I had seen the ground clearance of our bus plus the extra strong almost off-road style bus tires

The night was rough as expected and I am sure our bus driver broke the company intern record for speeding from Uyuni to La Paz. They should consider to let him participate in the next DAKAR ralley! 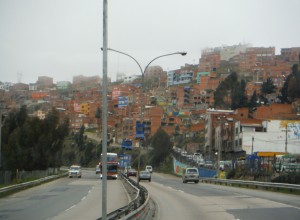 Our connecting bus to Copacabana left only 2 hours later and we were happy to get on, as many locals from La Paz left the city for their favorite weekend escape. What it means to be booked on a bus in Bolivia instead of Chile was made clear to us when we boarded our bus. It was already full! Somehow the company had sold more tickets than they had seats on the bus.

After back and forth with the staff we decided to take the bus whatever it would cost, as it was only a 3,5 hours trip. We could have taken a bus half an hour later, but we wanted to get going and not wait any longer. Natalie took the co-driver seat and I placed myself on a pillow between her and the bus driver. 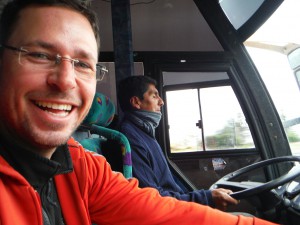 It was a big mistake, as it turned out only a few driving minutes later. Several main roads were blocked due to a huge running competition throughout the city. And then he was suddenly there, Mr. Bolivia, El Presidente, Senior Evo Morales! While we were lucky to drive a few meters between two road blocks, he and the who is who of Bolivia stood waving on a tribune to honor the athletes. We stopped several times and our bus driver tried almost desperately to escape the massive traffic jam by shifting our bus through minor streets of La Paz. I thought somehow La Paz did not want us to leave without a sight seeing tour 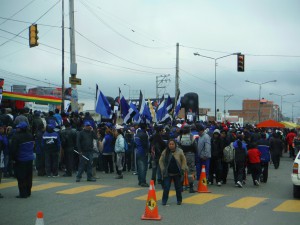 After a nice bus ride through the Bolivian countryside, where we could see how probably most of Bolivians really live, and an interesting lake crossing on small wooden ferries, we finally reached Copacabana after 6 hours. My buttock did not exist anymore, but we had successfully crossed Bolivia by bus. We treated ourselves to some fried Titicaca lake trouts and enjoyed the sunshine while walking through the center of the town. 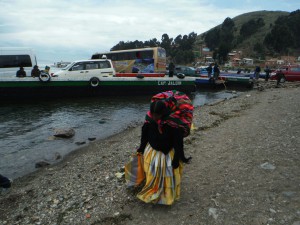 Hereby we discovered the lovely Basilica of our Lady of Copacabana, which is a famous place for Bolivians to get married, baptise or just to honor the Lady of Copacabana, as we learned. It was a Saturday and many families had come to Copacabana to celebrate weddings or baptisms. 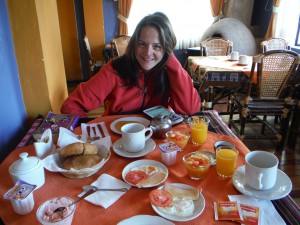 The next day we took a boat to visit the famous Isla del Sol. Our actual plan was to stay there for the night and hike around the island, before we would leave by boat again. We reached the island at perfect weather and started straight ahead to climb up the steep stairs to get to our planned hostel. But unfortunately Natalie struggled suddenly with a bad diarrhea during the ascent. Once she made it to the hostel, which of course was at the top of the island, she could not walk anymore and needed some rest. So we changed planes and enjoyed the beautiful view of the wide and deep blue Lake Titicaca from the lovely garden terrace of our hostel.

Later we got a bit hungry and went out for dinner. As Natalie still felt weak, we walked slowly up to the ridge of the south part of the island where most of the food places are located. We do not know why, but Pizza is the most famous food you can get there. So we sat down in one of the lovely little family run business and ordered pizza while the sunset was getting more spectacular minute by minute.  We both were surprised how delicious and thin the pizzas have been. 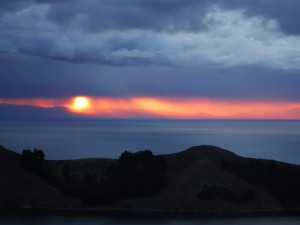 The next day Natalie felt a bit better. We took it slow and left late for a short walk to the old Inca ruin Temple del Sol after a long breakfast. Luckily the weather did not follow the forecast and treated us with lots of sun again. Even though we walked just a little bit, every step up made us breathless due to the high altitude of almost 4000 m.

It is needless to say that we had enormous respect for the hard working islanders in particular the women, who always carried their babies during all kind of work, even when carrying long steel pipes from the bottom of the island to the top. Impressive! 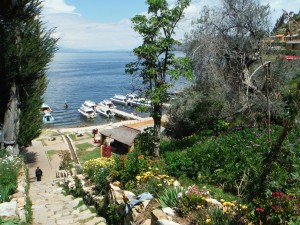 We made it safe back to Copacabana in the evening and finished our short but intensive trip through Bolivia with a sunset dinner at one of the many food stalls along the shores. Of course we had trout again.

The next day we traveled on to Peru. Thank you Bolivia, you are so colorful!