The last country we visited on our world travel in South America was Colombia. This made it somehow special, but even more so as Natalie has family there from her mothers side and we spent time and part of the travel with them. So we flew in to Cali from Quito and enjoyed the rare event of being welcomed and picked up by family from the airport. Her uncle Ciro and her cousin Xabine took care of us and showed us around in Cali. 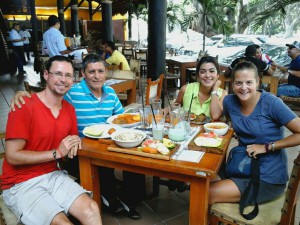 We even went out for dancing with Xabine and her husband in one of the most famous Salsa clubs Tin Tin Deo in town. Not only could we try to show off what we learned in our Salsa class in Germany the year before, but it was also a place for professional Salsa dancers to really show off their skills. It was impressive! 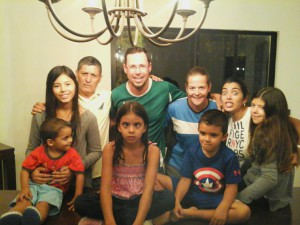 Besides this we enjoyed the time with the family there and got also to know the whole bunch of kids of her other cousin Claudia, which was a lot of fun. We even dared to try and take a family picture with all of them, but after several tries we gave up. They just have too much energy to stay still :). After 3 days we left for our actual road trip with uncle Ciro. First we went south to see Popayan a lovely town with an intact historical center. After strolling around a bit we left earlier as planned, because the police had warned us that the main road back towards Cali might be blocked due to a massive strike of the local people.

So we made our way back towards Cali with the plan to just pass by and go further north and spent the night at cousin Claudia’s Finca. Traveling on the Colombian roads by car is somehow exciting and partly scary. At first it goes constantly up and down and it is curvy like hell when we went across the mountains. Second not all traffic participants stick to the rules we know from Europe

So it took us some time to relax in the car and get used to the style of driving that would make up most part of the next few days. We arrived in at the Finca in the evening when it was already dark. When we woke up the next morning fully recovered, we were stunned by the view. The Finca is situated at Lake Calima and you have a perfect view of the lake from the terrace and living room!

As we did not have so much time, we drove on directly after getting up. We drove further north to visit the Cafetero zone, which is well known for their coffee plantations. The drive through the mountains and past the coffee and fruit plantations was just beautiful. In Salento we stopped to have a stroll in a lovely back leaned coffee town and enjoyed a delicious cup of coffee. The landscape there is beautifully green and covered with banana and coffee plants as far as you can look.

The next day we started early to visit a local coffee producer in the region around Armenia. We learned how the coffee is farmed and the process of coffee making from the beans into the cup. It was really interesting and we got to see a lot of beautiful tropical birds along the way. We of course took the chance to dress up in the local „Campesino“ clothes and try our luck at picking coffee beans. What do you think, we don’t look to bad, or?! 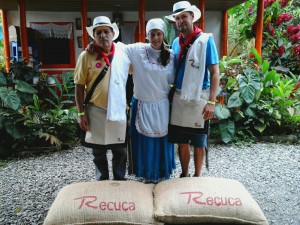 Our next stop was Medellin were we met more family: Natalie’s aunt Carol and more of her cousins. Her cousin Adriana and uncle Ciro showed us around. Medellin is the second largest city in Colombia. With its surrounding area that includes nine other cities, the metropolitan area of Medellin is the second-largest urban agglomeration in Colombia in terms of population and economy, with more than 3.5 million people. There are a few places in Medellin from where you have a great view over the city and it is really amazing how it has expanded and grown within the boundaries of the Andes. 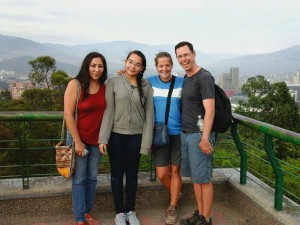 We also found some time to prepare our return to normal life as we used the excellent shopping opportunities to buy some clothes and souvenirs. We both had not bought any clothes for 2 years except the functional clothes for the trip. It was great fun and Medellin is the destination for it. Natalie is so hot in her freshly bought jeans ;).The other highlight was a family organized cooking class with her aunt Carol. She invited us into her house one morning and taught me and Natalie how to cook a proper Colombian Sancocho. 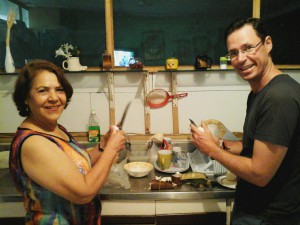 We left family and Medellin after 4 days towards Santa Marta at the Caribbean Sea. A big thanks to all of them for their time and passion to show us around. In particular to uncle Ciro who took a couple of days off to drive with us up to Medellin.

Our last part of the world trip should bring us to the northern end of South America. The wild and rough peninsula La Guajira! From Santa Marta we took 4 more different buses and collectivos and reached Cabo de la Vela in the evening after more than 20 hours on the road again. It is so far north and there is not much tourism there yet, that there are not direct connections to get there. As we were going there it somehow crossed my mind that we closed the circle there. 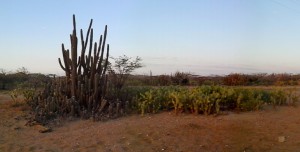 We had started our last big section of the world trip in the very south end of South America in Ushuaia in Argentina and now after countless kilometers and hours in the bus it would end on the other side of the continent in Cabo de la Vela in Colombia. We had not only traveled around the world, we also had traveled South America almost completely by bus from South to North. I felt satisfied because of all the amazing things we had done and seen, but also a bit sad that it would be ending so soon. 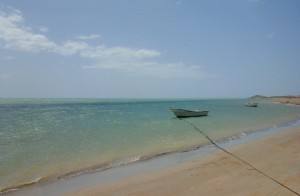 Cabo itself is a place where there is not much to do except eating fresh and tasty lobster or enjoying a good book and the great view at the aquamarine blue caribbean sea from your hammock right on the beach. So we did! We even slept in our hammocks only sheltered by a simple wooden roof on the beach. I have to say it is defenitly more romantic in films and books at it is in reality without being used to it. But thanks to our uncounted nights in buses, tents, at the airport on benches etc we mastered this as well :). 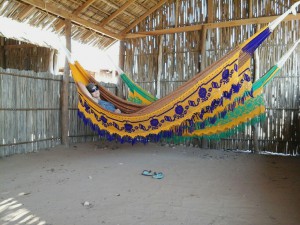 We left Guajira one day earlier as planned though, because the wind, which comes from the desert inland, was unusually strong bringing the sand everywhere. So the way back through the desert was actually our last real adventure. Our driver picked us up in his 20 year old Dodge pickup truck falling almost apart with 500.000 miles on the clock. At some point our driver even started to hold the front console to prevent it from breaking loose. Not to mention the windshield, which looked like it is going to break any minute. Luckily our hostel had reserved us the only two front seats. All the other passengers had to sit on the 2 benches on the back of the truck. 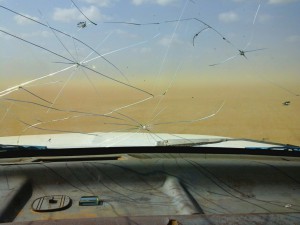 The sand storm which haunted us constantly in waves reminded me of documentaries I had watched about the Sahara, but this was just Colombia. I do not know how the other passengers survived the 2 hours in the open back of the truck. But even we ate tons of dust in the cabin as our driver left both side windows open ;). Even better, from time to time our driver lost track, because the visibility was close to zero :). At times we were just driving to a thick cloud of dust not seeing at all where we were going! Somehow we made it through the dusty desert and a couple of buses and collectivos later we finally reached the National Park Tyrona in the early evening. 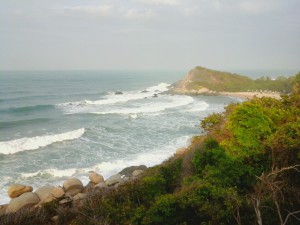 We stayed there for one night in a hammock again. Quite different to La Guajira, Tayrona is the opposite of a desert landscape. Tropical beaches lined the coast lines with many secluded little beaches and massive boulders everywhere. It was a little bit like the caribbean version of the Wilsons Promontery National Park in Australia. It was so peaceful and beautiful there! There are lots of opportunities to camp or sleep in hammocks.

As it stretches almost all the way from Cartagena to La Guajira, it is a perfect place to spend more time here. Unfortunately we only had 1 night and 2 days, but next time we will come again we will spend more time here. For our way back we hired 2 horses and a guide and rode back to the main gate through the thick jungle. My first horse ride, as an adult ever, and for Natalie the fulfillment of one of her wishes for the world trip :). 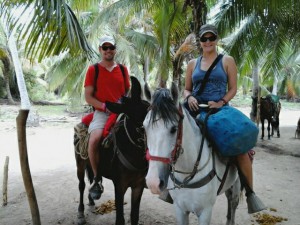 In the evening we traveled from Santa Marta further south the coast the our last destination in Colombia, the most beautiful city in the Caribbean: Cartagena! Natalie had chosen a nice hotel with a double room. Somehow at the end of our travel we both did not like to go into dorm rooms anymore. In Cartagena we celebrated the end of our epic trip with amazing seafood and some cocktails and enjoyed the charming colonial center. 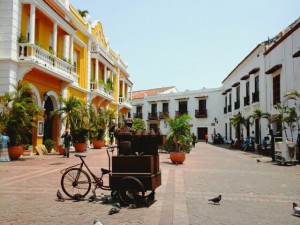 It is still surrounded by the massive wall the Spaniards had built back in the 16th century as an answer to the attack of the legendary pirate Sir Francis Drake, who had almost destroyed the city in his hunt for gold. We also did a day trip to some surrounding beaches, but instantly missed the peaceful atmosphere of Tayrona. As a main tourist destination for locals and Americans, the beautiful beaches here are crowded with people selling stuff and hundreds of plastic blue and red sun covers that ruin the romantic beach view, at least for us. 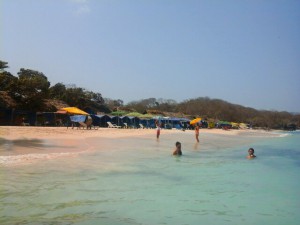 Instead we then rather went back to the city and enjoyed our last Colombian jugos and delicious seafood, while the city was full of life and excitement. All over the historic centre the annual film festival was taking place and people were enjoying free open-air cinema everywhere. We left Cartagena, Columbia and the continent of South America on the 15th of March after 4 incredible months in South America and almost 12 month since we had started our world trip. Now our journey home would start, stopping first in New York to visit Natalie’s brother and his family. 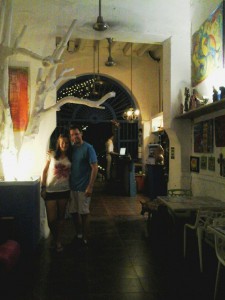