In the late morning hours our train from Udaipur dropped us off at the main train station in Jaipur. We had not booked us a place to stay upfront, but we knew a clean and cheap place to go. As usual we were immediately surrounded by lots of taxi and rickshaw drivers when we left the station with our backpacks. Their intention is not only to bring you to your hotel, furthermore they try to sell their guiding services to you during your stay. Ours did so as well, but we had already decided to do our sightseeing without a guide, as we love to discover places on our own. So he took us to our guesthouse and still waited around for 30 min in case we change our minds, but we did not. At the New India Guesthouse they surprised us with the room fare they offered to us. We had looked up the room before on the internet for 575 Rupies per day and they now offered it for 1000 Rupies. Sometimes looking things up, but not booking it and then going there directly to book it, gives you a good idea about how much they try to rip you off. So with Natalie pretending to leave and me playing the good guy, we finally managed to bring them down to 560 Rupies since it was low season. Actually it was fun to exercise our negotiating skills again. 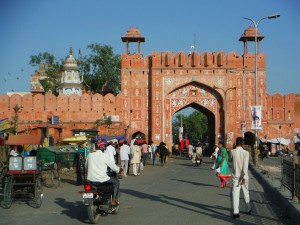 After we had settled down, we started to explore the city, which is also called the Pink City. It is obviously named after its old quarter, which is surrounded by a beautiful pink coloured city wall made out of pink sand stone and the main street bazaar buildings are in the same colour as well. On our stroll we found a tandoori place by chance, which we knew was highly recommended on the internet as good street food. Without any real food until then, we only had some rusks and bananas on the train, we welcomed the possibility to have some proper Indian street food. The place only consisted of a front open kitchen including charcoal grill and a basic eating room with shabby plastic chairs and tables. The whole area outside was full of car and motor scooter repair shops, which created a truly hard working atmosphere. All good signs for authentic and honest local food! We ordered some veggy curry, tandoori chicken skewer and butter roti, which is an Indian flat bread. It took some time, as they made everything fresh, but it was so worth it. Especially the fresh backed roti bread was incredibly good. Together with the charcoal roasted chicken and the well flavoured curries it was a feast. 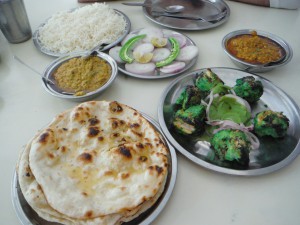 It became our favourite place to eat and during our stay we went there everyday for an early lunch and dinner to eat our way through the menu. Well fed we continued our tour. After getting lost in side streets for a couple of times, we finally reached one of the impressive gates leading into the old quarter. A swarm of rickshaws and pedestrians was noisily squeezing through it. We jumped into the moving crowd and floated into the old quarter. Inside the main street, buildings were packed with little shops overflowing with all kind of goods. Constantly surrounded by traders, who invited us into their shops we slowly made our way through the crowd. Somehow we escaped into a Hindu temple on the street. The priest on duty was a friendly man, who invited us to the roof to catch a view on Jaipur. We got some useful tips what to see during our visit and what was going on in Jaipur. He told us that the governmemt is building a metro that will also have some stations in the old city. He said that many locals are concerned, as they are not sure the old buildings might suffer or even get damaged in the long term with building work underground taking place. 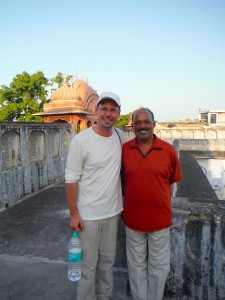 It was actually nice to see that locals here really care about their heritage. We noticed that also while walking through the old city and saw lots of painting work going on and people sweeping the entrance to their shops. It was refreshing to see Indians care about their environment compared to Mumbai, where you get the feeling no one cares or feels responsible. He and his wife were also running a little hand craft shop. We could not resist to buy our first little souvenir since we started our journey, a hand-woven turquoise pillow cover Natalie fell in love with. With this purchase in our bags and the sun starting to set, we walked back to our guesthouse. The next day we made a trip to the famous Amber Fort Palace, 7 km outside of Jaipur. It is beautifully located in the mountains and the number one sight in the area. 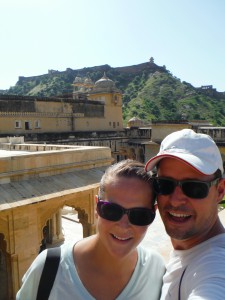 Our guesthouse manager was very kind to tell us how to get there by bus, as we wanted to experience the real local transport. Tourists usually would go there by rickshaw. To get on a bus in Jaipur was far more adventurous than what we are used to from Germany. It was even more challenging for us, as there were no bus signs or schedules around. To get on the right bus meant first of all walking along the main road and looking out for buses. Mostly they make their way slowly through the dense traffic in the middle of the street surrounded by wild honking scooters, cars, rickshaws and cows. So once we had spotted a potential bus candidate, I had to zigzag through the fast moving traffic to jump onto the slow moving bus and tell the ticket boy or driver where we wanted to go to find out if this was our bus. The first 6 buses I tried did not go in our direction and I had to jump off again, trying to make my way back through the wild traffic. Finally the 7th bus was the right one and Natalie jumped on. The mini bus was not big and already completely packed with around 30 people. We squeezed ourselves in and I still have no clue how it actually worked out. After a while the bus was less crowded and we could see how the Indians were looking at us, still in disbelieve what we were doing on their bus.

After that experience the hurdle was taken and we improved our bus riding skills by using the Jaipur buses regularly.

When we reached the Amber Fort Palace, the view was just stunning. Perfectly situated on a mountain, it is widly surrounded by a massiv wall, which almost looked like a small version of the Chinese wall. The palace itself was a mixture of a strong fortress from outside and a fairy tale palace from inside. Natalie and me spent a couple of hours there discovering beautiful courtyards, endless rooms, dead ends and even a connecting tunnel to the nearby Jagar Fort. It was a lot to take in and after a few hours we went to sit down on a bench outside in the shade. We hadn’t sat there long and a group of kids came up to us, asking if they can have a picture with us. We had been asked that question many times already throughout India, usually by young adults though. This time it felt like a photo session, as first they wanted to have a group picture, then every kid wanted a picture on their own with us and then some more group photos. With these cute kids it was a lot of fun though and in the end, we asked for a group picture for our photo album. 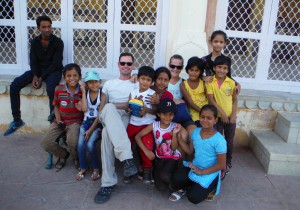 Back in our guesthouse, we discovered that Ludo (Mensch Ärger dich nicht) is also played in India. The manager invited me to play a round with his staff. The rules are quite similar to those in Germany. So it was actually easy to join their game. Nevertheless I lost the game, but it was fun to play with them. Our next day was reserved for some shopping on the bazaars in the old quarter in Jaipur. After a good late breakfast at our favourite tandoori food place, we walked to the old city again. This time taking a different route through the newer part of the city, which looks like any other city part on the way to a western city part. McDonald’s is usually the first to conquer the city and other big names are not far away. Once we reached the gates again, we threw ourselves into the street market to buy Natalie a pair of Indian style sandals and blouse. We tried our best and bargained hard. After a couple of shops, we felt confident about the price, which in some cases varied by 100 % from the first offer. She looks absolutely beautiful in her Indian dress! 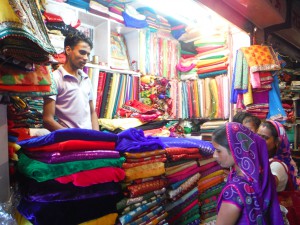 After our successful shopping tour, we had a great coffee in the well-known Indian Coffee House. It was really interesting to see that coffee in India is clearly something the middle and upper class would drink. The coffee is cheap in general, but expensive compared to the tea you get everywhere on the streets. The place was also mostly visited by men, who looked like they were having their business chats in there. In the late afternoon we made our way to the eastern end of the city to the so-called Monkey Temple, which overlooks the whole city from the eastern mountain range. It got its name from all the monkeys living up there and there really were a lot. The end of the day and also the end of our 3 days in Jaipur could not have ended better than with a fantastic sunset view over this bustling and lovely city with monkeys running around everywhere. The next morning, we got up early again to catch our train to Agra to see the majestic Taj Mahal. 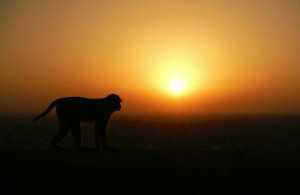