So this time it is my turn, Mathias, to write a post. After 2000 km of traveling through the South Island of New Zealand, I got really excited about the upcoming 3 day Abel Tasman Coast Track. 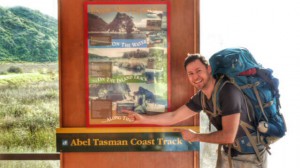 We had booked our 2 nights at the huts along the track on our arrival day in Auckland 2 weeks ago. So in front of us was a proper 3 day hike. The track is very famous and one of the best coast hiking tracks in New Zealand. It goes through wild rainforest, yellow sandy beaches and rocky streams. So enough reason to be very excited :). Unfortunately, we arrived at our starting point Marahou on a very rainy day and the weather forecast said it would be the same for the next 3 days. We took a campground very close to the starting point of the track in Marahou. To cheer us up, I made some dinner, which was all fine until I broke the glass lid of the stove in the van after I placed the hot pan with fresh roasted chestnuts on it. It broke in 1000 pieces, quite spectacular actually ;). My family will now probably say: „So typical“. And then in addition it started to rain so badly, it sounded like the world is coming to an end. The next morning was thus a big surprise to us after having had very little sleep due to the loud rain on our van roof. The morning welcomed us with less clouds, blue sky and lots of sunshine! So after 2 hours of final preparations, we finally started our trip. We had a 24 km track in front of us, but were very happy about the unexpected weather change and the fact that we had no one else with us. 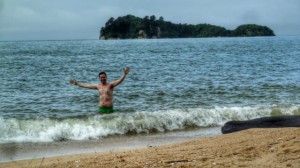 I was so happy, I could not resist to take a small bath in the sea during our quick break. So refreshing!!! It was just great to see the sunlight shining through the green leaves of the forest and listening to the birds around us. We we surrounded by fern plants tall as trees and most of the plants looked like they have been here since million of years. We went up and down and almost every corner had another view onto small golden bays and beaches. 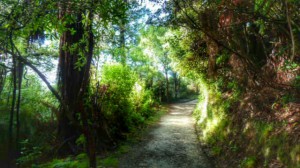 Our small challenge for the first day was a low tide crossing of Torrent Bay for 30 min. We had to be there at a specific time to be able to cross the little stream at its lowest point and it still meant walking through knee high water. So we took our shoes off. Natalie started to cross the stream first and I stayed behind to take a picture.  But then she asked for some help. So I put the camera in my left pocket and started to cross the stream as well. The water came up really fast and when I tried to pull up my pants a bit higher the camera dropped out of my pocket and fell into the water (I know, I can hear my family already: „So typical…!“). I could get it out very quickly, but it was still all wet. 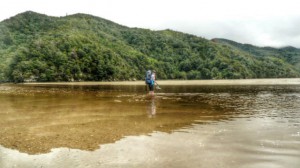 During the second half of the crossing all I could think about was if we lost all pictures or the camera was broken or both!? Natalie was sooo patient with me these days even though I broke the stove lid just a couple of hours before as well! We stopped for a late lunch and checked our stuff. The camera was dead, but fortunately all pictures were still available on the SD card. So we enjoyed our homemade sandwiches and relaxed on the beach a bit. I looked around and it was just us, how wonderful! But we could see the clouds coming again. 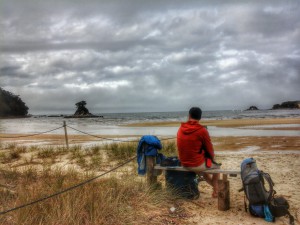 We headed off for the last 4 hours (12km) and reached Barks Bay, our booked hut for the night. With the last steps the weather turned rapidly into rain and wind. We were happy to have made it there safely and on time. All huts along the track serve fresh water, a wood fired oven, benches, a table, no electricity but candles and mattresses. There is space for more or less 25 people. All food and cooking equipment needs to be brought. It was so cozy inside and good to stay there for the night, as we had heavy rain all night long. The morning started with light rain. We slept till 9 a.m. as we needed some rest after our long distance hike the day before. We left to Awaroa Hut at 11 a.m., which was planned as a 4 hour trip. Rain and wind became stronger but our rain clothes did a very good job for most of the part. Because of a first steep part and our fast pace, we sweated a lot though. Parts of the track followed the beach line and other trampers told us that they had to pass this part in hip deep water at high waves. Oh no, the heavy rain and wind were already very challenging. In order to avoid to get cold while waiting for a lower tide in this part, we decided to keep on going without shoes. The tide was fortunately lower than announced and despite heavy rain and storm we made it safely through this part and found some less exposed parts of the track in the forest to put our shoes back on. Finally we reached Awaroa Hut at 3 p.m. There was not a single dry part on me and Natalie, but the fire place was already fired up with wood and we started to warm up and dry our stuff. Step by step all our companions of the last night arrived and we were happy that all of them made it wet but safely. It rained all night long and the hut based ranger told us that the water taxis were already not allowed to run that day and will probably not be allowed to come the next day to pick us up from our next days hiking stop Totaranui, which was meant to be our finish point. We should walk back the next day to the nearby Awaroa Lodge to call them for further information at 9 a.m. Despite our little problem we had a very nice evening together with the people. It turned out most of them have been traveling for a long time and we received great tips for our trips to Australia and Asia. 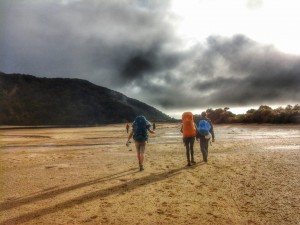 It rained all night again and the next day started early for all of us at 6.30 a.m. As expected the weather was so bad, we could not continue our planned 3rd day route. Instead we had to go back to the lodge to check if a water taxi would bring us back. Our ranger gave us last instructions how to cross the bay at low tide. Once there it was not a big surprise to us to hear that all water taxi services for that day and maybe the day after were to be cancelled! The final decision came at 12 a.m. when Natalie was told that the boats definitely were cancelled for the whole day. Now it was official, we were stranded on the Abel Tasman Track. Even the streets north and south of us were closed due to earth slips and tree falls as well. No one was allowed on the track anymore and no buses or water taxis were allowed to run. We both had just enough food to cover us till the next morning, but most of our new friends did not. We decided to asked at the lodge if we could buy some food of them to cook for all of us and they were so friendly. Only the limitation of money and cooking equipment stopped me from cooking a 5 course dinner for everyone ;). The kitchen chef was so amused about our request of 1,5 kg of rice and some leftover veggies, that he made us a deal for just 15 dollars to buy that of him. Back at our hut we all put our leftovers together and cooked the best tasting veggie rice I ever made to feed 7 very hungry stranded hikers.

The next morning the storm was gone. The ranger told us that our water taxi would probably be going today. Nevertheless, he said it was the first time in his 15 years of working there that a water taxi could not come for 2 days in a row. What a historic moment to share! As predicted, all water taxi were running that day again and we caught our water taxi at 10.30. am. At best weather we enjoyed a beautiful boat trip along the coast. It was so nice to feel the sun on our skin again. Our driver was so friendly, he even stopped at a seal colony for a while so we could catch a view of them. Unfortunately, we do not have any pictures of this part yet, as the camera is broken and we did not want to take out our Samsung tablet on open water. As soon as we will receive the pictures from our stranded companions though, we will share them. In the meantime, have a look at the gallery to see some more pictures of the trip. 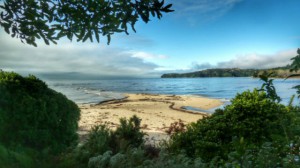 Our little adventure trip ended safely back in Marahou. Happy and satisfied we said goodby to our new friends and started immediately to find a hot shower