After visiting Australia’s dry and hot centre, we made it, thanks to TigerAir, safely and quickly to Cairns at the north east coast. Natalie found us a private place via Airbnb in town, which was very welcoming after we had spent a couple of nights in dorms. Cairns itself isn’t very spectacular, it is more a hub for visiting the coral reef.
However, walking home from town in the evening was an event as we saw many flying foxes (very large bats) everywhere, which were coming out after sunset to eat fruits from the trees. 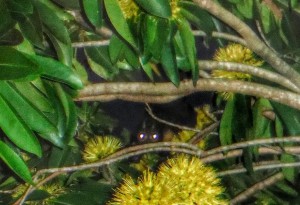 The next day we had booked a tour into the Daintree rainforest north of Cairns. Thanks to its isolation on the Australian continent, its the oldest rainforest on earth (130 Mio years old). We enjoyed a guided walk through it, full of hope to see one of the rare Cassowaries.

Unfortunately, the 2m tall bird did not show up :(. Despite that, we had a lot of fun learning stuff about the ancient plants, spotted several spiders and lizards on the way and had lunch in the middle of the forest at a nice creek. Our
biggest animal encounter that day was a 3m long salt water crocodile, which showed itself during our boattrip on the Daintree river after the rain had stopped. We learned that they are not longer called ‚salties‘, as scientist recently found out that more than 50% of them actually spend their time preferably in freshwater like creeks and rivers.
For that reason it can easily be life threatening for humans to take a bath in places like these. (Sidenote: the small town Cardwell, 2hours south from Cairns, is so packed with crocs that even the council swimpool has a croc warning sign 😉 ). 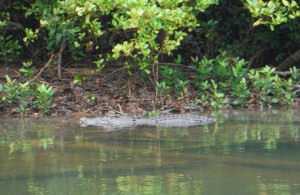 The next morning we left Cairns with a campervan to head off south. Relocation transfer is the magic word to get a good deal. A campervan rental company needs a van to be taken back to its original place and you pay next to nothing if you do it for them. We did that job and got a massive van for a few dollars to drive it to Townsville in 3 days.

Our first stop was the beautiful and natural beach campsite at Mission Beach. With a rich tropical rainforest in the back and a lonely secluded beach in the front, we treated ourself to a perfect beach chillout. Thanks to my 50 plus sunblock at this point :). To spot several of the azur blue Ulysses butterflies completed our feeling to be in a tropical paradise. We both hope that this awesome place will stay clear from getting to touristy and will keep its castaway flair. The next morning we got back on the road towards Townsville, a relaxed 4 hour drive along sugar cain fields, banana plantages and wild forest. The landscape changed away from lush rainforest to dryer and more open subtropic vegetation. 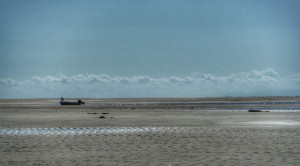 Only a few minutes away from Townsville we made it to a small local beach campsite, Saunders Beach. We spent the afternoon sunbathing and reading, while some locals were celebrating their Sunday family barbecue. The next morning started as usually with breakfast and coffee for my Schatz. We had plenty of time to get everything ready for the campervan to drop it off in Townsville and get on the bus which was supposed to bring us to Arlie Beach until the evening. A couple of hours later we were stranded at the van drop off location. It was damn hot and far to walk to the next bus station. The moment we had put on our heavy bagpacks, a friendly man offered us a lift with his car to the city. How incredibly nice was that? We were so thankful and started our journey towards Airlie Beach and the Whitsundays.