It is 6 am and we are on the train again. We are leaving Udaipur after 2 days. So early in the morning even the Indians here are quiet. Sitting next to us still sleepy with small eyes. Outside the train the sun rises over the majestic land of the Maharadschas of Rajasthan. The wide open land with some smooth mountains is peacefully touched in golden light. Our two days in Udaipur were very different to Mumbai, in a positiv way. Udaipur is known for its romantic setting with its shimmering lakes, beautiful palaces and narrow colourful lanes. 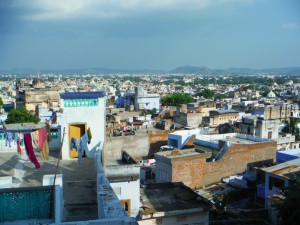 When we disembarked the train two days ago, we were welcomed by a small and almost tidy train station. There were only four platforms and ours was the only train. Our guesthouse sent us a rikshaw to pick us up free of charge. During the ride our driver offered us his guiding services for the next day. We were reminded once again that nothing is really free of charge. Nevertheless we booked him for the next day, as we would have only one full day to see the main highlights around the town and he seemed to be friendly and reliable. When we arrived at our guesthouse, we finally felt we arrived in the India we came to see. 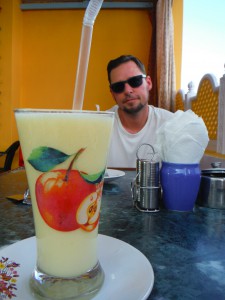 Our guesthouse was run by a lovely family and had all the charm you would expect from a privately run Indian place. The house was colourful and the rooms were clean, tidy and decorated with lots of little Indian style details. It was located in a non touristic neighbourhood at the top of a hill with a rooftop terrace, which gave us a beautiful view over Udaipur. We both instantly felt at home. Before we did anything else, we sat down on the rooftop terrace to enjoy a Mango Lassi. It was so nice and quiet up there and the view was fantastic. We could have easily stayed there for several days and just read some books, but we only had 1 1/2 days in this city. 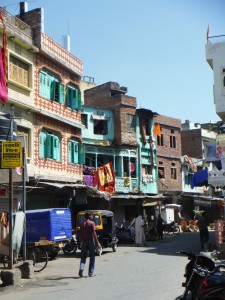 So equipped with a handwritten map of our hosts, we started to discover Udaipur in the late afternoon: Narrow lanes winding through old Indian houses standing back to back. The front entrances were fully packed with local shops and little businesses. Honking scooters and only a car now and then trying to make their way past pedestrians and sometimes cows. The only British colonial building in town is a clock tower. From there we should have found our way to the lake at the city easily, but we did not. While we stood there a bit lost in front of one of the old Hindu temples, we were approached by a local in fluent German. If we had heard about the big royal wedding on the lakes island, he asked us. He would lead us to the lake and assured us he is just a nice citizen of Udaipur without any intention to charge us for guiding or sell us something. 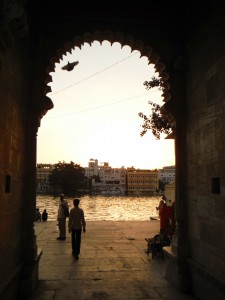 Once we had reached the lake shore, he told us that his little business is just a few steps from there. His grandmother crafts cashmere scarfs that are exhibited in Germany and other European countries. In fact, the next day they will leave the city to fly to Germany for another exhibition. He would like to show us the special scarf and practise his German by sharing the secrets of weaving with us. Only 5 min later each of us had a cashmere scarf around our necks. The story which was told was to fantastic to be true. His 94 year old grandma still weaves all the scarfs. They both constantly travel to Europe to have exhibitions at the Louvre in Paris and other big cities. He would sell his scarfs there for 650 Euro. The next day he would catch a Lufthansa flight with his grandma to Berlin for the next exhibition. He really wants to do us a favor and would leave us the scarfs for an incredible price, only 48 Euro each. As quickly as we were brought inside his shop, as quickly he had switched of the air condition and the lights in his shop and showed us the door, when we told him we could not accept his generous offer :). Although we had invested some time, it was actually fun to hear his sales story. He really had made his homework and served us a perfectly customized story, which should make us feel comfortable and intrigued because of the relation to our German background. 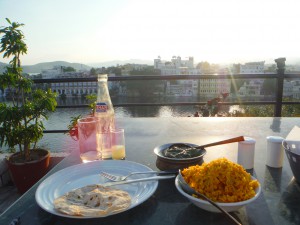 It was time to escape from the touristy streets around the lake. So we went up to one of the rooftop bars. The place we chose was right at the lake. The view from above was stunning. We could see the sun disappearing behind the far mountain range. The lake, the palace and the surrounding city laid peacefully and quiet around us, perfectly enlighted by golden sunlight. Birds were flying over our heads. The whole atmosphere was just magic. It was as we could look through a time window to catch a glimpse of the old India. The next morning started with a good breakfast on the rooftop cafe of our guesthouse. I had made Natalie her morning coffee and we had banana pancake and omelette. Our rikshaw driver Jamil picked us up at 10 am. We both were excited to see more of Udaipur.

After a first stop at the morning market, where mostly fresh vegetables and handcrafted baskets were sold, we went to the royal cemetery. A place where all Maharadschas of the Mewar dynasty are buried since centuries. Each tomb was like a little temple in various sizes. Taking pictures was not permitted, the sign next to the entrance said. But the guard on duty there said for 20 Rupies he will give us his special allowence :). Besides some monkeys resting in the shady tomb temples, we were on our own. It was so quiet we still couldn’t believe that after noisy Mumbai.

The next sight we visited was the monument of Maharadscha Pratap, who still is the number one hero in that region. He fought succesfully over 25 years against invading neighbouring kingdoms. The whole area is very nicely located uphill next to the second main lake of Udaipur. We rested there for some time under a shady tree and enjoyed the view over the lake and city. The third place on our tour was the historic Royal Princesss Garden, which once was build of one of the Maharadschas for his daughter. Until today it is a beautiful garden, which is really well maintained. A cool brise from the countless fountains makes you want to stay there over the hot day. Shady benches under old trees are inviting you to have a seat. 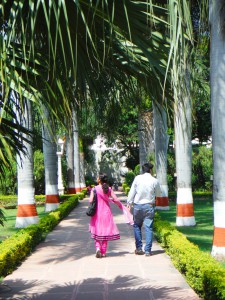 And that seems to be what lot of locals do here to escape the city buzz. Indian visitors and locals made themself comfortable on the greens and walkways to have a picnic or even a nap. Actually a perfect place for that or just to read a book and spend some time relaxing. The highlight of our tour was our last sight: the City Palace. One of the few palaces in India, which strictly followed Indian architecture. It was again not allowed to take pictures, unless you pay a fee. This time the fee was really expensive, so we decided not to take pictures from inside. As we walked through the rich decorated rooms, stairways and chambers we really could imagine how the Maharadschas reigned over old India in former days. The whole palace felt like it was taken out of an Indian fairy tale. 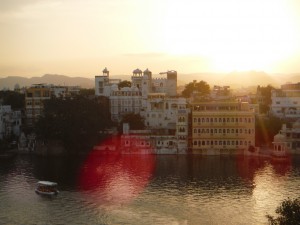 After 2 hours we left through the main gate, both of us flashed and overloaded with impressions. It was time to recover and recharge our batteries and we knew just the perfect place for that. How could our day end better than with a sunset dinner on our prefered roof top restaurant?

An Indian dream with potato spinach and curry and a beautiful peaceful sunset. As we walked home through the alleys, we could see that the city is getting ready for the Indian New Year festival. First decorations had been put up. What a shame that we wouldn’t be there for that. The next morning we would leave for Jaipur, our next destination. After our rugged start in Mumbai, Udaipur was a peaceful retreat, more like we had imagined India to be.