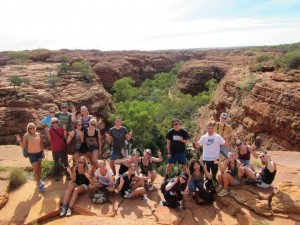 It was time to discover the Australian Outback. In preparation for it we did some research how best to do it and we were torn between hiring a van again and doing it on our own or going on a guided tour that offered sleeping in the outback under the stars. Seeing Mathias eye lighten up at the possibility to sleep out in the open it was clear then that we would go onto the bush camping tour.We flew from Melbourne to Alice Springs and from there we went onto the Rock Tour:  3 days in the Central Australian Outback discovering Kings Canyon, the Olgas and Ayers Rock and sleeping out in the open with everything else that lives out there.

The first day started early at 5:30 am and began with an 5 hour drive through nothingness, aka the outback, until we got close to our first destination: the Kings Canyon. The drive was somewhat exhausting, but a good preparation for our body to adapt to the weather conditions we would have the next days. It was hot, especially coming from chilly Melbourne, and there was no airconditioning on the bus, so you can imagine a 5 hour ride in that condition. When we arrived at Kings Canyon, we did a 3 hour hike through the area. Our guide did not have to remind us every half our to be drinking at least 1 litre of water per hour, our body was doing that job on its own. Now, we were there in winter time, I do not want to imagine the crazy people who come here in summer to see the rocks when it goes up to 40 degrees and more. We had about 28-30. I wasn’t surprised to hear then that every year tourist still die from heat exhaustion because they do not drink enough water, despite all the signs and warnings everywhere along the track and on the information brochures. Anyway, Mathias and I were once again happy that we chose to come out of season!

Our guide Robbie did a fantastic job, not only in keeping everyone alive (a girl from a different tour did have to go to hospital that night because she didn’t drink enough and was suffering symptoms of heat exhaustion), but also on giving us indepth background on the formation and development of the canyon. He was actually very passionate about his job which made it a fun and really great experience. He told me later that he had studied geography and then went into becoming a tour guide. No wonder then that he knew what he was talking about. His next destination will be Africa or South America, where he wants to became a guide for adventure tours. Maybe we will see him again :). 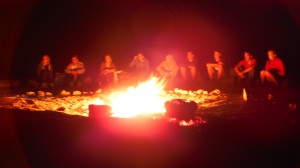 So after a great first hike, it was time to drive to our campsite. On the way we had to stop to collect firewood in the bush. Of course Mathias loved it and went for it with such an enthusiasm that he ripped out whole dead trees including the roots, while others just came back to the bus with bigger branches ;). It was a hilarious sight, unfortunately I forgot to take pictures of it. At the campsite Robbie then assigned task to everyone and asked if anyone knows how to make bread. So I volunteered without quite knowing what to expect. When he put some flour and herbs in front of me and said: ‚Here you go, make some bread.‘, even I was a bit stunned. That’s it? I was really glad then that I had baked so much homemade bread before we left Germany. So, mixing up all the flour and some herbs I had to improvise and used beer as my yeast source and added some water. Mixing it well until I got then same texture I was used to we put it into a pan and put it into some coals from the bush fire. An hour later, I was thrilled to see that the bread actually came out pretty well :). In the meantime Mathias was of course all intomthe cooking and helped to make a massive pan of chilli along with roasted vegetable for everyone. It was a really delicious camp dinner. As a surprise Robbie also prepared a bush specialty for us: Kangaroo tail Aboriginal style! It tasted fabulous! A bit like slow cooked lamb. 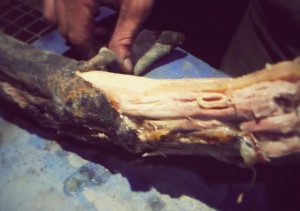 So after an exciting first day came the first exciting night in the bush. We all got a swag, which is pretty much an Australian sleeping bag cover, and some reassurance from Robbie that snakes and dingos are more afraid of us then vice versa and thus would not come close and then we closed our eyes and listened to the outback. It was a wonderful experience and it did feel totally safe somehow.

The next day we went to the Olgas (aka Kata Tjuta) and did another hike around there. Next to Ayers Rock (aka Uluru) it is one of the sacred sights of the Aboriginals and Robbie once again had a very good knowledge of the culture and explained their meaning and formation to us. In the evening we went to watch the sunset. The sun goes down opposite of Uluru and then gives it its famous bright red colour which normally is accompanied by a sky that turns red and purple behind Uluru. Unfortunately it was too cloudy for us to see the colour change in the sky, but Uluru did turn bright red!

The next morning we came back to the same spot to watch the sunrise. Another beautiful scenery when the sun comes up next to Uluru like a glowing fireball. This time the clouds helped to make the scene look even more impressive. After that we went to Uluru to do the basewalk around it. It was really interesting to see how different it looks from different angles and what shapes and forms the compression of the sand had created many many million years ago. It was a wonderful finish to our tour to see the biggest rock on this planet right in front of you knowing that what you see is just the tip of the rock and it actually goes down into the earth another 6km. How small and insignificant does that make you feel?